Guest post: How can governors support LGBT inclusivity in schools?

In this guest blog, Sidonie Bertrand-Shelton, Head of Education Programmes at Stonewall, outlines the questions governors should be asking to make sure schools are LGBT inclusive – and why inclusivity in schools is vital. 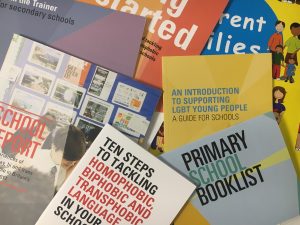 Our work won’t be finished until every child and young person is accepted without exception, in every school, service and youth club that they encounter. Whilst is may seem that Lesbian, Gay, Bi and Trans (LGBT) inclusion is a tricky subject to manage for schools, it is needed, and hundreds of schools are already doing it well.

You will have no doubt seen the recent protests in the news by parents and carers on the ‘No Outsiders’ programme, designed to talk about different families including LGBT families and people through children’s books. This is while Relationships and Sex Education in schools is being updated for the first time since 2000, with Relationships Education becoming compulsory for all children and young people. What this shows is that parent, carer and community engagement in the equalities work of a school becomes even more important to communicate, and to do so well.

Stonewall works with over 1,300 schools in the UK on tackling homophobic, biphobic and transphobic (HBT) bullying, including faith and church schools, special schools, primary and secondary schools too. Many tackle HBT bullying and language because of their faith and school values, not in spite of them.

In 2017 we conducted research with the University of Cambridge with 3,700 lesbian, gay, bi and trans young people aged 11-19 years. The School Report (2017) found that more than half (53 per cent) said there isn’t an adult at school they can talk to about being LGBT. We also found the following:

Key to this work is that all children and young people benefit from a school that is supportive, inclusive and celebrates difference and not just those who may identify at LGBT. The Teacher’s Report (2014) found that amongst pupils who experienced homophobic bullying were boys who weren’t good at sport and girls who were. This means this bullying is often used as a tool to police gendered expectations of all children, and prevents them from achieving in school.

There is a legal responsibility for schools to be tackling HBT bullying and embedding LGBT inclusion throughout the curriculum.

While there is a clear need for LGBT inclusive education and a legal responsibility for all schools as well, what questions should you be asking as governors?

Interested to find out more? There are a few ways to get involved in our network of schools: