Impact Survey winner Dominic tells us how his school is putting their £1,000 prize money to good use

We think becoming a school governor is an important and rewarding thing to do, but we wanted to hear our volunteers’ thoughts. So we recently asked our volunteers how they found their experience with Governors for Schools, and the responses have formed part of our Impact Report which we’ll be launching in January.

To say thank you to our volunteers for taking part in our Impact Survey, we entered every respondent into a prize draw to win £1000 for their school. Dominic, a chair of governors at Luddenham School near Faversham, Kent, was chosen at random as a winner. We caught up with him to find out how the school decided to spend the money. 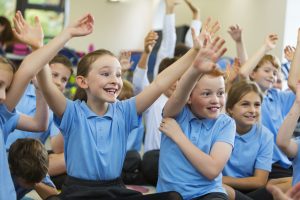 “I’m a chair of governors at a rural village primary school that was founded in the late 1800s. Luddenham School is about 2 miles outside of Faversham and nearly all of the children at the school live in the bigger town. Luddenham itself is now only made up of a couple of buildings; the village barely exists anymore! It’s a beautiful location for a school, surrounded by farmland and fields. There’s also a huge sense of community at Luddenham, which for me is the best part of being a governor there.”

“I’ve been a governor for over 30 years and a governor at Luddenham for about 12 years. I first got involved as a parent governor, then I was co-opted, and now I’m a member. I’ve been the chair of governors for a couple of years and I’ve enjoyed the role and all it has to offer. Luddenham became an Academy around 6 years ago and we’re not part of a trust. As a standalone school, the role of chair comes with a fair amount of responsibility – we have control over staff appointments and where we spend money.”

“The headteacher was over the moon when I told her the school had won £1000. Any extra money is greeted with open arms, but we wanted to make sure it went towards the capital improvement of the school. We’ve been trying to upgrade our technology so the plan is to use the money to buy a large interactive display screen for classrooms. Hopefully, in time we’ll be able to buy more to improve the learning experience for all our children.”